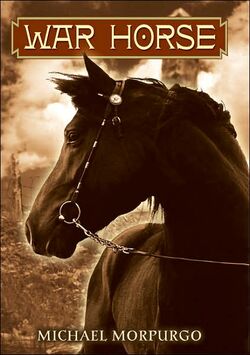 War Horse is a children's novel by Michael Morpurgo. It was first published in Great Britain by Kaye & Ward in 1982. The story recounts the experiences of Joey, a horse bought in a market and sold to the army for service in World War 1  Albert, his previous owner tries to bring him back before his father sells him but is to late , to bring him safely home. It formed the basis of both an award winning play in 2007 and an acclaimed film. War horse is  a very touching story, it was based on friendship, survival, hope, courage, strength and bravery.

War horse was introduced in a market were Albert's father bought Joey and then takes him to his farm in Deven, England were Joey and Albert become friends and Albert teaches Joey to become a farm horse.

Albert's father could not afford to keep Joey so he sends him to the Army without Albert knowing when albert found out he was more upset than he had ever been before but he knew joey had gone and there was nothing he could do.

( i may be young but i know what i'm talking about)

A young man called Albert embarks on a dangerous quest to locate his beloved horse in the First World War and bring him safely home.

Morpurgo met a World War I veteran in his local pub at Iddesleigh and learned that he had been in the Devon Yeomanry working with horses during the war. Morpurgo began thinking of how he could tell the story of the universal suffering of the Great War through the alternate perspective of a cavalry horse, but was unsure that he could do it. He also came across another villager, Captain Budgett, who had also been involved with the cavalry in WWI, and yet another who remembered the army coming to the village to buy horses. Morpurgo recognises the three men in the dedication section of the book, naming them as Albert Weeks, Wilfred Ellis and Captain Budgett.

Morpurgo founded Farms for City Children with his wife, a charity which gives inner city children a chance to live and work on a rural farm for a week. In an interview on BBC Radio 4, he recounted one of the events that convinced him he could write War Horse:

"One of the kids who came to the farm from Birmingham, a boy called Billy Bob Joe, years and years and years ago now, the teachers warned me that he had a stammer ... and told me not to ask him direct questions because it would terrify him if he had to be made to speak because he doesn’t speak. They said ‘He’s been two years in school and he hasn’t said a word, so please don’t confront him or he’ll run back to Birmingham’, which is a long way from Devon and they didn’t want that. So I did as I was told and I stood back and I watched him, and I could see that he related wonderfully to the animals, totally silently, never spoke to the other kids at all, and then I came in the last evening, which I always used to do, to read them a story. It was a dark November evening and I came into the yard behind this big Victorian house where they all live, and there he was, Billy, standing in his slippers by the stable door and the lantern above his head, talking. Talking, talking, talking, to the horse. And the horse, Hebe, had her head out of, just over the top of the stable, and she was listening, that’s what I noticed, that the ears were going, and she knew - I knew she knew - that she had to stay there whilst this went on, because this kid wanted to talk, and the horse wanted to listen, and I knew this was a two way thing, and I wasn’t being sentimental, and I stood there and I listened, then I went and got the teachers, and brought them up through the vegetable garden, and we stood there in the shadows, and we listened to Billy talking, and they were completely amazed how this child who couldn’t get a word out, the words were simply flowing. All the fear had gone, and there was something about the intimacy of this relationship, the trust was building up between boy and horse, that I found enormously moving, and I thought, Well yes, you could write a story about the First World War through the eyes of a horse, let the horse tell the story, and let the story of the war come through the soldiers: British soldiers first of all, then German soldiers, then a French family with whom the horse spends winters, and that maybe you’ll then get a universal idea of the suffering of the First World War. So in a way I just took a gamble and went for it, and then wrote like a horse for about six months."[1]

Morpurgo recalled in another article: "As I listened to this boy telling the horse everything he'd done on the farm that day, I suddenly had the idea that of course the horse didn't understand every word, but that she knew it was important for her to stand there and be there for this child."

The third inspiration for the book, was an old oil painting that belonged to Morpurgo's wife Clare: "It was a very frightening and alarming painting, not the sort you'd want to hang on a wall. It showed horses during the First World War charging into barbed wire fences. It haunted me." The painting - by artist F. W. Reed - is dated 1917, and depicts a British cavalry charge on German lines, with horses entangled in barbed wire. Morpurgo mentions a fictionalised version of this painting in his 'Author's Note' at the start of the book. In this version, the painting shows a red bay (horse) with a white cross on his forehead, and the painting bears the legend: "Joey. Painted by Captain James Nicholls, autumn 1914."

Retrieved from "https://warhorse.fandom.com/wiki/War_Horse_(novel)?oldid=4946"
Community content is available under CC-BY-SA unless otherwise noted.